Lessons in Physics, the Mexican Hat and the persistent ZIRC -  “I’m only human after all”

This month is about likes & don’t likes.
As a fund manager, I obviously like it when the Fund performs better than Mr. Market, especially after a long stretch of underperformance vs. its benchmark. In the balancing act that is investing, it’s good for a while to feel good. I'm only human after all.

As a student, I didn’t really like physics that much. I preferred art history. But my dad pushed me into physics as an option in High School. I still kind of hold a grudge. Thankfully, however, I’ve learned that life has more imagination than I shall ever have and as it happens, one of my best mates is a physicist. So fasten your seat belt! Let’s have a superfast lesson in physics in 100 words!

During a conversation with my physicist friend (Thanks A!), the subject of the “Higgs Field” came about.
The Higgs Field is a scalar  field exhibiting a potential energy  at every point in space. Without that field particles would not have the mass required to attract one another, and would float around freely at light speed. Also, gravity as we know it would not work because mass sources would not be there to influence the path of other masses.
The mechanism behind this, is called spontaneous symetry breaking and the potential function representing the Higgs Field has the shape of a Mexican hat. The instability of this geometry pushes the field down towards the trough of the hat and thus gives a particle its valuable mass. 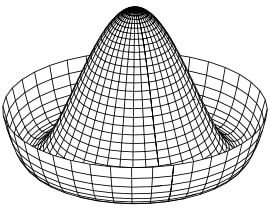 My dad must be laughing out loud up there!

So, if you will allow me, I shall borrow this image and somehow relate the Higgs Field & spontaneous symmetry breaking to the unstable (massless) ZIRC (Zero Interest Rate Capitalism) environment.
The ball sitting at the crown of the hat (low interest rates) is held by the invisible hand of the Central Banks. It seems logical that without this interference, the ball would naturally roll down and settle at the brim of the hat and bring back the necessary value (mass) to our currencies.
How long will the Fed & its consorts hold the ball up there? It feels like it’s defying Newton’s law of universal gravitation.

We need to go back to physics!

OK! So I guess I’ll throw my Mexican hat into the ring. I understand that this interference (from the Central Banks) has encouraged the sudden meteoric rise of Bitcoin & others like it and the potential devaluation/degradation of (some) currencies as we know them. What will be the Central Banks' response to this?
If my dad were still here, he’d divert these new Masters of the Universe from their dubious practice of sorcerer’s apprentice and push them manu militari towards the physics classroom! For me I’d say: “Back to school guys! The break is over!”

As to art history, I learned that it is "like a feather bed - you fall into it and it catches you". I need to catch up on some sleep, so good night and good bye for now.